Green tea plays an important role in Mali. It is a welcome drink, gathers people together, and its consumption is subject to specific rules and protocol.
First it is important to understand that Malians make a fundamental difference between green tea and black tea.
Black tea has been introduced during French colonial time. Malians call it ‘Lipton’, after the most well-known black tea brand, now owned by Unilever. This refers to tea in tea bags and is consumed in cups with milk and sugar, mainly by middle class families. There is no specific ceremony for black tea consumption.
Green tea, however, is different. It is by far more popular and widely consumed and arrived long before ‘Lipton’. In northern Mali, in the trading towns of Timbuktu and Djenne, green tea is known since the early nineteenth century. It was taken by caravan traders and their agents. They celebrated the tea ceremony in the presence of their trading partners and local rulers. Tea was a luxury and connoted with prestige. For more than a century, green tea remained the beverage of these traders. Only gradually, other wealthy people in the north began to take tea as well.
Green tea became more widely known in Mali only after independence when tea was sold in shops opened by the government in all parts of the country. And only in the 1990s, after the opening of the markets for private trade, more and more tea arrived in the country. From then on, tea was consumed by increasing numbers of Malians, especially the young, and everywhere, at all times of the day, groups of people were sitting together, discussing and chatting. Tea became like a national drink.
Green tea, called ataya or thé, is not consumed from a cup on a table. Taking tea is not just to drink something; the purpose is rather to bring people together to chat, exchange ideas and experience the flair of the drink with all senses: its smell, the sound when it is poured, the different tastes of the servings. Taking green tea requires time and is taken together with guests or friends. Green tea is prepared in the open air on a little mobile charcoal oven in the presence of the participants. One of them is designed to prepare the tea. He or she takes all the time needed to prepare the beverage. Water is heated in a tea pot, tea leaves are added, then the liquid is sweetened with generous amounts of sugar; occasionally also mint leaves and other spices are added. Before it is served, the master of the ceremony raises the arm to pour the liquid from one glass or pot to the other until a handsome cap of foam emerges on top of the tea. Only then, it is served from small glasses. The oldest person present receives the first glass of each serving. 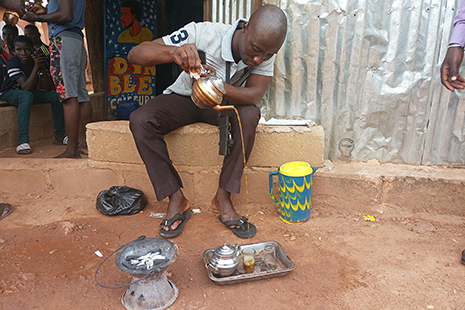 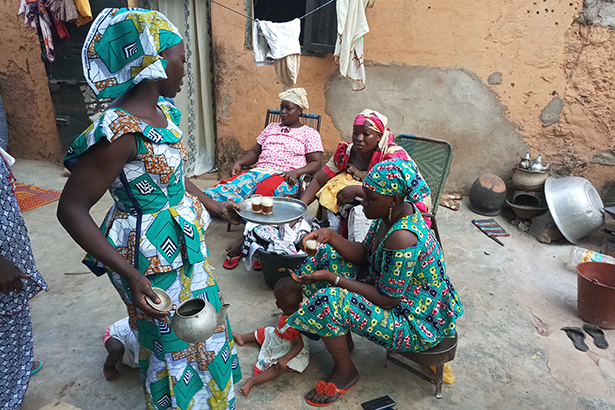